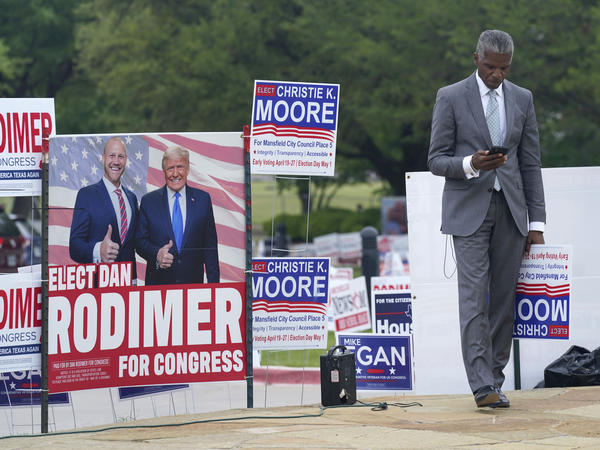 Susan Wright, the wife of the late Republican Rep. Ron Wright, advanced Saturday to a runoff election for Texas’ Sixth Congressional District, which many see a bellwether for future contests.

As of 9:46 p.m. local time, Wright received 18.9% of the votes. Candidates were required to get over 50% in order to avoid a runoff. There were 23 candidates on the ballot.

The district, which covers some southeastern parts of Fort Worth, as well as some rural areas, is seen as the country’s first competitive contest since President Biden took office. Former President Trump—who voiced his support of Wright—carried the district by 3 points in 2020. Four years earlier, he won by 12 points.

Wright, who’s been endorsed by a list of Texas Republicans and has won the backing of the anti-tax Club for Growth, which has spent six figures to support her bid.

I'm truly honored to be endorsed by President Trump, and I'm so proud to be the only candidate in this race President Trump trusts to be his ally in our fight to Make America Great Again. #TX06 pic.twitter.com/3YBpLnlvLE

The runoff will be a race between two of the top candidates from the special election. Wright was followed by Republican State Rep. Jake Ellzey who carried 14.2% of the vote and Democrat Jana Lynne Sanchez who had 13.6% of the vote. The New York Times reported that the special election results could disappoint Democrats who hoped for a better showing for Sanchez.

Sanchez posted on Twitter prior to the polls opening that Democrats have a chance to flip the district and “send a true leader to Congress who’ll get things done for working families across North Texas.”

“It’s been challenging at times, but the work goes on and he would want me to do what he did which is engage with voters, hear what they have to say, and talk to them so that is what we are doing,” Wright said, according to Fox4News.com.