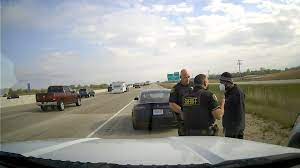 A 38-year-old driver from Palatine, Illinois, was ticketed and accused of sleeping behind the wheel of a 2019 Tesla, according to a sheriff’s report.

Wisconsin authorities ticketed a man who was seen sleeping behind the wheel of his Tesla as the car drove itself in a mode known as Autopilot, according to a sheriff’s report.

The Kenosha County sheriff reported that shortly before 8 a.m. Sunday, a deputy drove alongside the 2019 Tesla and observed its driver dozing as the car hurtled along Interstate 94.

The deputy tried to perform a traffic stop but noted that “the driver was not pulling over as he followed behind it for approximately 2 miles at 82 mph through Kenosha County.”

Eventually, after the deputy again pulled alongside the Tesla, the driver woke up and stopped the vehicle. According to the report, the driver denied being asleep but admitted being tired, and he was issued a citation for “inattentive driving.”

In Washington state Saturday night, a Tesla on Autopilot crashed into a state trooper’s vehicle. No one was injured, and the driver was ticketed.

A California man died this month when his Tesla collided with a stopped tractor-trailer; the man had shared videos on social media of him driving with Autopilot before the crash.

A Tesla that “no one was driving” killed the two people inside it, one in the passenger seat and one in the back seat, when it crashed into a tree in Texas in April.

While Autopilot is only semi-autonomous and drivers are still supposed to maintain control of vehicles while using them, Tesla sells an upgrade called Full Self-Driving, which attracted the attention of California officials this week.

The California Department of Motor Vehicles confirmed that it is conducting a “review” of Tesla’s claims about sales of its Full Self-Driving mode, which costs $10,000 and is promised to be enabled by a future update.

Tesla, which disbanded its public relations department last year, did not immediately respond to a request for comment.