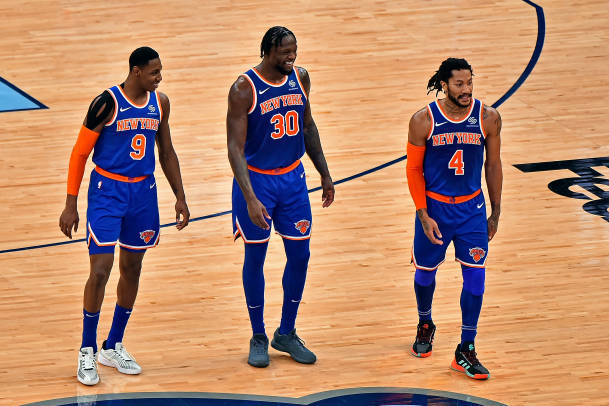 The New York Knicks are back in the playoffs for the first time since 2013 after the Boston Celtics fell to the Cleveland Cavaliers 102-94 on Wednesday evening.

The New York Knicks are headed to the Playoffs. #NewYorkForever pic.twitter.com/kpp3Pu3RJr

Boston sits seventh in the Eastern Conference with a 35-35 record. Because the Celtics’ best-case record scenario is 37-35, they can no longer catch the 38-31 Knicks, who are in sixth.

The top teams in the East and West are guaranteed playoff berths, while the Nos. 7-10 teams will enter a play-in tournament to determine the final two playoff spots in each conference.

Simply reaching the playoffs is an accomplishment for a team that entered the year with low expectations. Of note, New York faced 20-1 odds to make the playoffs when the season began, per The Action Network.

New York went 21-45 last season and was one of eight squads not invited to the NBA restart in Orlando, Florida. It was the seventh straight losing season for the franchise, featuring four years with fewer than 30 wins.

There were limited changes to the roster in the offseason, but bringing in a new team president in Leon Rose and head coach in Tom Thibodeau appears to have turned things around for the troubled organization.

Julius Randle took a major leap this season, earning his first All-Star selection while becoming a top contender for the Most Improved Player award. He entered the day averaging 24.0 points, 10.3 rebounds and 5.9 assists as a versatile contributor and focal point of the offense.

RJ Barrett also took a big step in his second year in the NBA, improving his efficiency while showing the promise many expected as the No. 3 pick in the 2019 draft.

Adding in the surprising impact of young players such as Immanuel Quickley and veterans like Derrick Rose, Alec Burks and Nerlens Noel, the Knicks were able to surprise many by competing with the top teams in the East all season long.

The Knicks will now spend the remaining three regular-season games working to get the best seed.

They finish at home against the San Antonio Spurs, Charlotte Hornets and Celtics and can end as high as fourth, where the 39-31 Atlanta Hawks currently reside. The 38-31 Miami Heat own the head-to-head tiebreaker with the Knicks and sit fifth in the playoff standings.

The Knicks ultimately hope to prepare for a potential deep run in the playoffs. They could be a scary team going forward thanks to the quality outside shooting and a defense that ranks fourth in the NBA in efficiency.

Even with an organization that has won just one playoff series since 2000, this team has what it takes to make noise in the postseason.