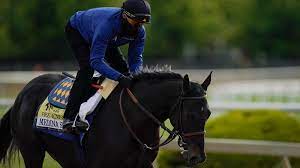 Kentucky Derby winner Medina Spirit has been cleared to compete in the Preakness Stakes after passing three drug tests, the Maryland Jockey Club said Friday. The announcement comes after the horse tested positive for the steroid betamethasone in a sample taken after the Derby, throwing the horse racing world into turmoil.

Medina Spirit and two other horses from trainer Bob Baffert were given three rounds of blood sample testing in recent days as a condition of competing in this weekend’s races, which will be held at the Pimlico Race Course in Baltimore. All three horses were cleared to compete, the jockey club said. Medina Spirit and Concert Tour will race in the Preakness, and Beautiful Gift will run in the George E. Mitchell Black-Eyed Susan Stakes.

The controversy surrounding Medina Spirit began on Sunday when Baffert announced the horse had failed a post-race drug test. Baffert said he was told the horse was found to have 21 picograms of betamethasone, which is double Kentucky’s legal threshold, according to The Associated Press.

Churchill Downs, the racecourse that hosts the Kentucky Derby, suspended Baffert and said it would invalidate Medina Spirit’s win if the results of the post-race test were upheld.

Baffert denied using the steroid on the horse on Sunday, but on Tuesday said Medina Spirit had been treated with an ointment that contained betamethasone in the days before the Derby.

“While we do not know definitively that this was the source of the alleged 21 picograms found in Medina Spirit’s post-race blood sample, and our investigation is continuing, I have been told by equine pharmacology experts that this could explain the test results,” Baffert said in a statement. “As such, I wanted to be forthright about this fact as soon as I learned of this information.”

Previous Posts Israeli Strike In Gaza Destroys Building That Housed AP, Other Media
Next Posts Bill Gates admits affair with Microsoft employee, denies being forced off Microsoft's board over it